The world is increasingly complex.

This complexity requires deeper expertise that can compromise the ability to keep up with peripheral knowledge. A new concept of teams helps overcome this limitation. Traditional teams didn’t encourage or facilitate communication with other teams. The old paradigm was more likely to pit teams against one another in a form of competitive goading designed to get more out of each team member.

Creating a Team of Teams

A recent Forbes article claims that 90% of all the information in the world was created during the last two years. At the speed new information is being created, there is no way for a team that works alone to survive in any industry.

Will Rogers said, “You know everyone is ignorant, just on different subjects.” His observation is truer today than it was when he said it almost 100 years ago. The new team concept, called Team of Teams, reduce 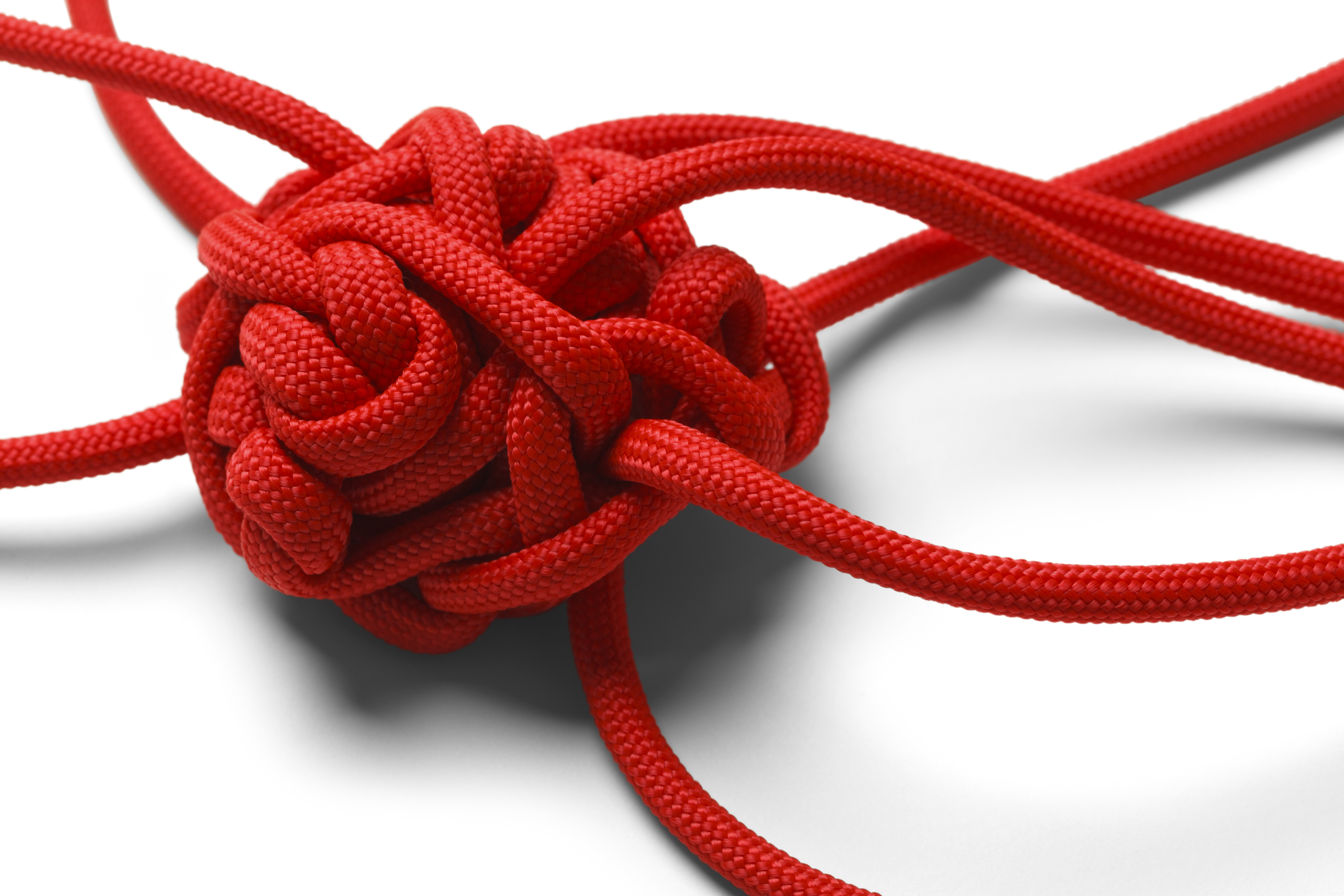 In the Team of Teams model, teammates are encouraged to develop relationships with members of other teams. Instead of attempting to create a team that knows everything, the new concept creates teams with deep expertise in their area and relies on teams in related areas to fill in their knowledge gaps.

The Team of Teams Concept at Work

During a recent meeting with seventy organizations that provide services to veterans, the attendees explored how the Team of Teams concept could improve the services they provide. Experts in seven specialties were divided into teams. Each team received a case study about a veteran who needed assistance.

As part of the exercise, each team collaboratively listed the resources they were aware of that could help the veteran with needs their team doesn’t provide. They then sent members of their team around the room to teams with expertise in those other services.

To document their travels, each group unrolled a uniquely colored ball of yarn that they hooked at their starting place and at anchors at each team they visited, leaving brightly colored yarn marking their trail. Crossing the room began to feel like a combination of jump rope and limbo as the members searching for information crisscrossed the room.  An aerial view would have looked like this: 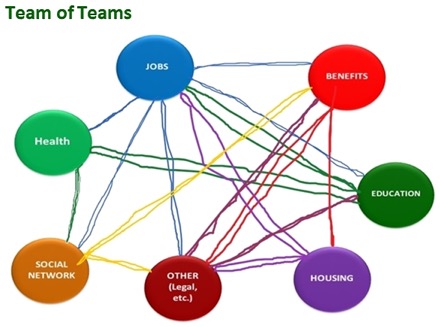 Initially, each team of experts possessed valuable information about the veteran that the team seeking information didn’t have. Every piece of new information increased their ability to identify the veteran’s most important needs.

For example, when the education team learned that the veteran’s discharge was other than honorable, they didn’t think he qualified for benefits. The legal team knew that the VA was willing to change a veteran’s status, or willing to provide limited benefits in cases where what we now know about PTSD changes the way a discharge with similar circumstances is handled today.

In other words, if someone received an other than honorable discharge due to symptoms of PTSD that weren’t recognized at the time, their ability to access veteran’s benefits can be increased. Only two of the seven teams knew this potentially life-changing information before intergroup communication began.

The Team of Teams concept expands the ability of a team to produce results because it helps them tap into expertise outside their wheelhouses. An isolated team can make significant mistakes when they don’t know what they don’t know. The Team of Teams approach may not give them the answer immediately, but it will increase their ability to ask the right questions sooner.

“Psychological flexibility spans a wide range of human abilities to: recognize and adapt to various situational demands; shift mindsets or behavioral repertoires when these strategies compromise personal or social functioning; maintain balance among important life domains; and be aware, open, and committed to behaviors that are congruent with deeply held values.” 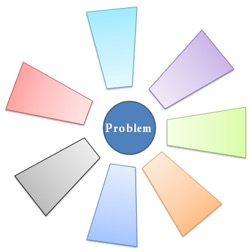 With psychological flexibility in mind, using the Team of Teams method increases the effectiveness of every team. Before visiting with other groups, each group made a list of the resources they were aware of that could address the veteran’s most immediate need. Although they had a sincere desire to help the veteran, the initial solutions reflected their own limited perspective. In every case, their knowledge of resources expanded because they talked to experts in other areas.

None of the teams involved in the task of unrolling balls of yarn arrived at the best solution on their own. After talking with experts in other areas, many of the experts also changed their mind about the veteran’s most important needs. Viewing the same problem through multiple lenses increases the likelihood that the right things will be done at the right time.

The Team of Teams approach may be messy in the early stages, but figuring out that your initial solution isn’t the best solution prevents bigger messes later. This approach helps organizations see problems through multiple perspectives which ultimately leads to fewer missteps and greater achievements.

Are you ready? Download our free workbook to start doing the work to overhaul your employee morale and build an unstoppable team.