What does an ideal workplace look like? I believe it’s a place where team members are happy and engaged, performance is continually on a path to improvement, and customers are enthusiastic ambassadors for the brand. Getting to that point requires what I call an “Own it Culture” — a place where leaders act boldly to promote accountability. 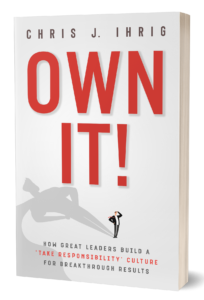 That’s why I wrote my latest book, Own It: How Great Leaders Build A ‘Take Responsibility’ Culture For Breakthrough Results.

Now more than ever, it’s essential for leaders and team members to connect and engage with the concept of ownership. The Great Resignation is upending outdated approaches to management, and if teams are to not only survive but thrive during these challenging times, then a new approach is needed.

I’ve included an excerpt from my book below, explaining what it looks like when this philosophy is put into practice.

Peter Block, the highly respected author and consultant, describes stewardship as, “The willingness to be accountable for the well-being of the larger organization.” In an Own It Culture, front-line workers are responsible for delivering customer value by both owning their jobs and owning the systems they work in. Emergent Leaders partner with co-workers as stewards of the systems. Although stewards are most often not literally owners of the business, they think and act like owners. 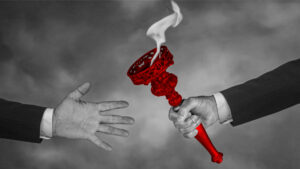 Perhaps the best example I’ve come across of a CEO who has completely turned over ownership of individual jobs to team members is Ricardo Semler of Brazil-based Semco. Semler gives people the freedom to choose what they’d like to do, the right to decide on their personal working hours, and even the authority to set their own salaries.

Hard to believe? In doing business this way, Semco grew from $35 million to $212 million in annual revenue in just six years. With more than 3,000 employees, they have virtually no staff turnovers. Semler’s philosophy of putting employee freedom and job satisfaction ahead of corporate goals has proven that it’s possible to achieve incredible growth and profit that far exceed that of their competitors.

Consider the story of Auro Alves as told by Semler himself. “Auro Alves is a sales and technical assistance manager at Semco. He began his career with us as a truck driver. He’d driven a bus in São Paulo before joining Semco and expected that he’d spend his life as a heavy-duty commercial driver. Less than five months after coming to Semco, he moved into product acquisition and eight months after that, took a job as a junior buyer. He got involved in union activities, (that’s right, Semco is a union organization) discovered that he liked being a leader and that other workers were comfortable with his management style, too. He had a knack for coming up with new ways of doing old tasks at Semco in order to involve more people.”

Semco allows groups to set their own salaries based on five factors: (1) external wage comparison survey data, (2) internal wage comparison data, (3) the market conditions that determine whether they can pay above or below the market, (4) what each individual would like to be making, and (5) what their spouses, neighbors, and friends are making.

Of course, the last two factors are known only to each individual. The others are made known to the company employees. By making the first three factors known to employees, an Own It Culture makes each individual responsible for justifying their salary to co-workers.

CEOs like Ricardo Semler and other organizations that have created an Own It Culture support job ownership because they understand how much taking this approach benefits both customers and the organization. Customers are happier because they’re interacting with team members who, because they own their jobs, are willing and able to do what it takes to meet their unique needs. The executives of the company are happier because the company operates with far less waste and much better profitability.

In order to successfully link responsibility with accountability, it’s important that people have the freedom to explore. It’s the element of choice that allows them to take on more responsibility. In an Own It Culture, people are given the freedom to negotiate with their co-workers to exchange or share job responsibilities.

As the word implies, negotiating requires some give and take among the participants. This means that no one in the group is given the right to cherry-pick the best tasks leaving the worst chores to others. It also means that someone called a “boss” no longer assigns or delegates job tasks either. Instead, members in an Own It Culture decide together who will be responsible for each task.

Negotiating job tasks is a dynamic process. The team member who does each job task changes over time as people gain the experience and knowledge that they need to take on greater levels of responsibility and accountability.

The goals of the job negotiation process are to:

One of the goals of creating an Own It Culture is to give people the opportunity to rediscover a level of job satisfaction that they may have lost in a more conventional “managed” work environment. Although it may seem contradictory, in order for people to perform well in meeting the needs of customers, they need to be able to pursue their own self interests. They need to be allowed to do work that they find personally motivating and satisfying.

Put simply, people who feel trusted to pursue their own dreams, put their hearts and souls into their work.

Reexamining an Antiquated Approach to Leadership

I truly believe an “Own It Culture” is the only antidote to old-fashioned workplaces that often leave team members feeling disengaged and disempowered. If you’re interested in building an “Own It Culture” within your own organization, my book is currently available for purchase on Amazon.